Though old for his time, this incredibly senile Dragonborn wizard somehow retains a sprightly disposition, demonstrating a sense of humor from time to time. Whenever children are present he attempts to entertain them with his magic, though is generally interrupted by Captain Koke.

Aware of fashion codes, ShialBaz wore an alternate set of robes with frilled sleeves to the White King's party.

After a death experience he changed his moniker from the Scorned to the Reborn.

"Uhm, we should kill them and take their omelets"
– referring to gobblins
BLUE LIGHTNING!
How long has it been since you felt the tender caress of a woman?
– to one of Mayor Aered Bertholme guards
"Now things are heating up"
– referring to the idea of smoking the goblins out
Light the sh*t on fire and throw it like the monkeys we are!
– on tactics
I don't know this chick...
– when asked for an eulogy for Valisilwen Telaldren 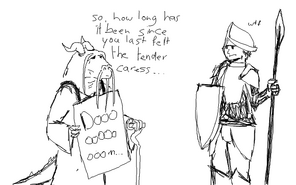 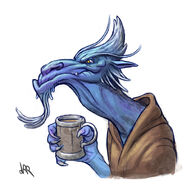 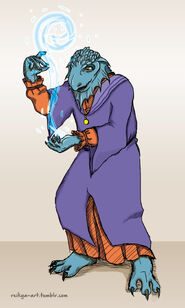 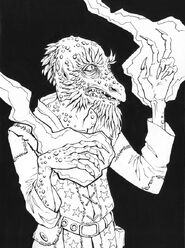 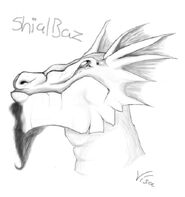 ShialBaz by SireniSireni
Add a photo to this gallery
Retrieved from "https://rollplaywestmarches.fandom.com/wiki/ShialBaz_the_Reborn?oldid=5179"
Community content is available under CC-BY-SA unless otherwise noted.